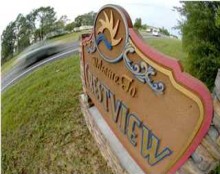 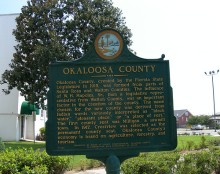 
Those search results are no longer available.

The City of Crestview received its charter from the Florida Legislature and was officially incorporated in 1916. Crestview's name was chosen because it is located on the peak of a long woodland range between the Yellow and Shoal rivers, which flow almost parallel on the east and west side of the city. After Okaloosa County was formed by the State Legislature in 1915, from portions of western Walton County and eastern Santa Rosa County, Crestview became the County Seat in 1917 and remains so today.

With a population of more than 17,000 citizens, Crestview is located at the junction of three major highways; U.S. 90, State Road 85, and Interstate Highway 10, which resulted in its acclaimed designation as the "Hub City" of Northwest Florida. The City is 50 miles east of Pensacola, 120 miles west of Tallahassee, and 30 miles inland from the beautiful Gulf of Mexico. Crestview's elevation of 235 feet above sea level places it as one of the highest points in the state. It receives 65 inches of rainfall annually...the most in the State of Florida. Also, the city was designated as a main street city in 1997 by the Florida Department of State.

The CSX, Inc. Railroad runs through Crestview. Parallel with this railroad is the Old Spanish Trail which extends from Jacksonville west to El Paso, Texas, thus being one of the great truck lines of the country and rich in tradition and history of the Indian, French, Spanish and English settlers in this nation.

If one should wonder what has happened to make Crestview the thriving, friendly, fast growing city we know today, it might be said that it was a fabled fountain of gold or silver. In actuality, it was the dreams and visions of the staunch and sturdy few who were living here in 1915. These early residents realized the natural advantages offered at this particular site for the building of a city and they set out to provide the foundation for such an undertaking.

In 1997, the City applied, and was approved, for a Main Street program designation by the Secretary of State. This program is embraced nationwide and encompasses the tasks of scheduling and promotion of events such as block parties, downtown days, street festivals, parades, sidewalk sales and cultural events to cultivate and enhance downtown redevelopment.

In 1998, the City hired a full time Director and assisted in the establishment of the Crestview Main Street Association, Inc., whose membership consists of business owners, citizens and other interested parties desiring to revitalize the downtown area. Today, the organization boasts 90 members who are pledged to support the City in their development efforts.

Starting in 1996, the City began a three-phase development effort to construct a major streetscape project in the CRA area. All three phases were earmarked for the restoration of Main Street to the tune of $3.7 million, funded by Tax Increment Financing Funds, grants and general funds.

In 2001, the City Council designated a Historic Preservation District and applied for a grant funding to research and document the histories for 200 structures within the CRA area and district. The survey entailed having all structures surveyed, evaluated, and documented with their histories, qualifying them for a State or National historical significance designation. Properties classified on State or National Registries may seek grant funding for historical restoration as part of the redevelopment efforts.

The Okaloosa County Veterans Memorial, Inc., an organization established to honor deceased veterans during wartime, a War Memorial adjacent to the County Courthouse was dedicated in March 2003. Meanwhile, business owners and merchants are busy restoring commercial properties to meet the new Florida Building Code. A new zoning code is being formulated to focus on downtown properties to compliment historic preservation efforts underway.

Here in Crestview you will find an assortment of comfortable homes, churches, schools, recreational facilities, businesses, and industries all working together as a happy, growing city. The health, fire, and police departments, under a stable and prosperous city government working to make this city a wonderful place to live, protect all these things while the related services of the city ensure we uphold our commitment to provide services second to none.

Information provided by the Crestview Chamber of Commerce. Need a relocation packet ($12.00)? Contact them at:

We are members of:

Our listings are featured on:

Add us to your RSS reader!